I attended a Public Workshop at (Sacramento) City Hall on Thursday, April 12th, at which the latest “CONCEPT” drawings for a new Downtown Arena (called the “Entertainment and Sports Complex” or ESC) and an Intermodal Transportation Facility on the Railyards site were unveiled. The presenters stressed that these concept drawings are intended to show basic “ZONES” for the intermodal station and arena areas rather than specific “footprints” of actual buildings. They also emphasized that this is a “work in progress” and is likely to change over time. With that said, in my opinion this latest concept is GOOD news for transit riders as well as others who will visit and work in this area.

1. Keeps Transit Modes together in one area at the EAST end of the site rather than separating the Intermodal Terminal from Light Rail and other transportation modes as was shown in the previous drawing (Item #1 in previous concept drawing below).
2. Removes the Hotel and Parking Structure from the FAR WEST side of the site (see Item #2 in previous concept drawing below)
3. “Opens Up” the views and pedestrian flows from Downtown to the Historic Shops – the previous concept (showing the Arena at the EAST end) would have blocked these views and flows. This was a major issue cited in the Urban Land Institute’s recommendations to the City for the Railyards Project.

Check at this latest “preferred” concept drawing (taken on my cell phone camera): 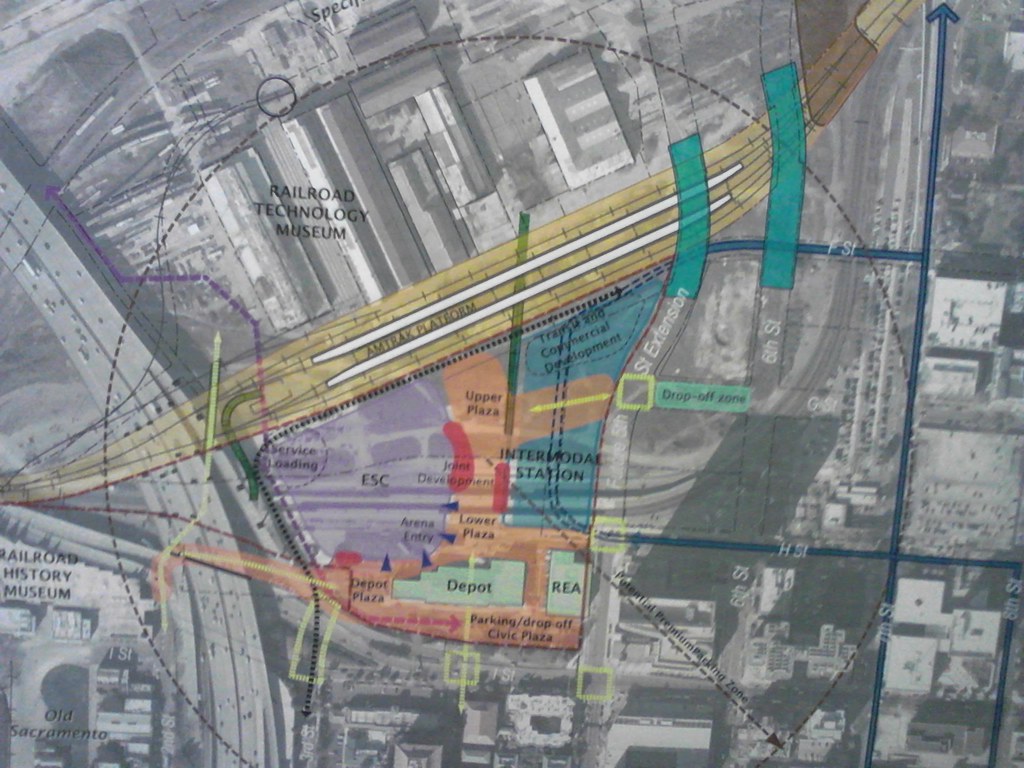 I applaud the fact that the planners have listened to input from transit riders as well as the recommendations of the Urban Land Institute, and have reflected both in this latest concept proposal.

I still have a number of concerns which will hopefully be addressed as the project progresses, including the following:

* The Relocated Rail Passenger Platforms currently have NO RESTROOMS available, and the nearest ones will be located in the Historic Depot, which is more than 1,000 ft from the new platforms. In my opinion this is a critical requirement that needs to be fixed prior to the opening of the platforms.
* The latest concept shows the future HIGH SPEED RAIL zone separated from the Intermodal Station by at least a couple of blocks (east of 6th Street). To me this detracts from the purpose of an “Intermodal” facility which is to incorporate ALL modes of transportation into one area (as was envisioned in the original concept).
* Traffic Congestion during peak rush hours remains a concern, especially with thousands of arena attendees arriving downtown at the same time that thousands of commuters are exiting the same area.

Below are links to articles from the Sacramento BEE that describe the previous “concept” with the Arena at the FAR EAST end of the site, and further developments through April 15: