Noel Braymer wrote a good piece about Amtrak CEO Anderson’s musings on the use of Diesel Multiple Units (“DMU”) to replace aging Amfleet cars. (See below).  I’d just like to embellish Noel’s thoughts a little.  I’ve ridden in a lot of DMUs since the late 50’s when they were introduced as part of British Railway’s 1955 Modernization Plan.  Don’t let anyone tell you this is “state of the art”.  The concept goes back a hundred years.  DMUs have been the saviour of many rail services around the world.  They are functional and relatively low cost to operate.  The more modern ones give a reasonable ride and operating performance, but are definitely outperformed by EMUs.

The biggest drawback, and why Anderson’s idea doesn’t make much sense, is that for anything more than about a half hour ride the buzzing of 600hp of Cummins diesel under your feet is tedious, monotonous, and eventually irritating.  If you are in the UK do everything you can to avoid Virgin CrossCountry “Voyager” units. If this is what Anderson has in mind then he should be strapped in the seat of a Voyager for 4 hours.  No doubt also he would like to equip these DMUs with airline seating.  Embraer Regional Jet on Steel Wheels?  No thank you.

A locomotive hauled train is, in my view, a far better travel experience, and it is more easily customized, e.g. with cafe and dining cars, baggage and express freight, bicycle cars etc.   I hope to be asking Mr. Anderson about his DMU experiences at the Los Angeles Rail Summit next week.  Here’s what Noel has to say:

Amtrak President Richard Anderson recently spoke at an Amtrak Employee Town Hall Event. One of the points he made at this was the need to replace Amtrak’s aging Amfleet cars and P42 locomotives. So far so good. Then he starts taking about buying Diesel Multiple Unit trains (DMU’s) based on the success of such vehicles in Fort Worth, Texas and Santa Rosa, California. Further he said  “If we want to appeal to a millennial generation in high-density urban markets, we need the same kind of modern, unit trains we see operating in Europe and Asia. Making these investments now will benefit the next generation of Amtrak.” What Mr. Anderson was talking about was the new 27 mile DMU service  now under construction between Fort Worth and the Dallas-Fort Worth Airport opening late this year. This service will likely do well as a local service. But it’s not a great model for intercity service. The Santa Rosa train is California’s SMART Train running in Sonoma and Marin County. It now has 43 miles of route, which will grow to 70 miles when the service is finished. While this service is operating already beyond expectations, it is still a fairly short line service with a limited market. It is very unlikely that Caltrain would drop its plans to electrify its service and replace them with DMU’s. 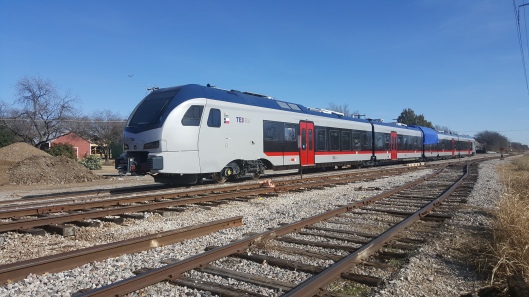 The reason for this is economics. For passenger services of fairly short distances and demand, DMU service is attractive. Running short trains without a locomotive and a larger crew lowers its operating costs. The only countries I can think off hand with intercity DMU services are Ireland and Japan. In the case of Japan these services are mostly on rural branch lines often including tilt trains for faster service in mountainous areas of Japan. DMU’s can accelerate faster than locomotive hauled trains because they have a higher horsepower to weight ratio than a conventional locomotive hauled train. For trains with more than 4 cars the economics fall increasingly in the favor of locomotive power. In Ireland many of the diesel locomotive trains have been replaced with DMU equipment for both intercity rail service and some commuter lines. Most of these DMU trains have 4 cars and a few up to 5, while the busier, longer trains still use locomotives. The Irish DMU service is good and fairly fast. But the population of the entire Island of Ireland is less than 8 million people which is less than that of Los Angeles County. In terms of size Ireland is roughly the size of Southern California. Amtrak on the other hand is supposed to be a national service.

Why are diesel locomotive trains more economical as trains get bigger? Basically one or two large diesel engines cost less to run than several smaller diesel engines driving the wheels on the cars of a long DMU train. Plus the fact that the more engines you have running for a train, the more likely one of those engines will fail. The most reliable mechanical devices have the fewest moving parts. Internal combustion engines have a lot of moving parts. In the case of many high speed and transit trains, they often are EMU’s, electric trains with powered trucks usually at every truck on the train. Another reason high speed and transit electric trains don’t have locomotives is because they often run on high quality tracks with excellent signaling and few or no grade crossings. This is often not the case for passenger trains in the United States which have more accidents than many countries with well developed rail services. Locomotive hauled trains are less likely to suffer major damage in a crash than a train using only self powered passenger cars. Accidents happen even on the best railroads. An example of this happened in Germany in 2016. On a single track railroad in Bavaria a dispatcher’s error caused 2 DMU trains to collide with each other during morning rush hour. This resulted in 12 people being killed and 85 injured between the two DMU trains.

A major principle in engineering is reliability is usually highest for a product that has been in production the longest. Basically the longer something has been in production, the fewer “bugs” are left to fix. The inverse is true when something is new and many of the “bugs” have not yet been found. The recent experiences of buying rail passenger in the United States has been one of long delays and problems with the equipment. This has most recently been seen in the failure of the original car builder to produce a bilevel car for Amtrak services supported by the states which failed to go into production. At the last minute Siemens was given the job to supply the same number of new conventional cars to replace the original order which had called for bi-level cars. This change of vendors means the States buying these cars will get delivered, but 2 or 3 later than they were suppose to which was by this year because of the problems designing a new bi-level car. At least we are finally going to get new cars.

What Siemens was able to do was take a model of a railcar they had already had in production which it modified to meet FRA regulations and build it in California. This same equipment is used in many places in Europe and Asia. This helps make Siemens equipment very reliable and economical to build and to use. What Amtrak should be more concerned about than just attracting millennials from High Density Urban areas is the larger market across the entire United States. There are plenty of places in this country with few travel options. Transportation services generally depend on a well established network. Few if any airlines flies without airports with good ground transportation and connections to other flights. This summer a German based company called Flixbus plans to start up service in California with services to cities in states near California. Flixbus doesn’t own buses. It runs a reservation and marketing service with agreements with small bus companies to carry the passengers. In 5 years since its start up Flixbus has become the largest bus service in Europe. Now it is in the train business too called Flixtrain with service between Berlin and Stuttgart as well as Hamburg and Cologne. Reservations for Flixtrain also include connecting services on Flixbus.